Who is Sarada Devi? 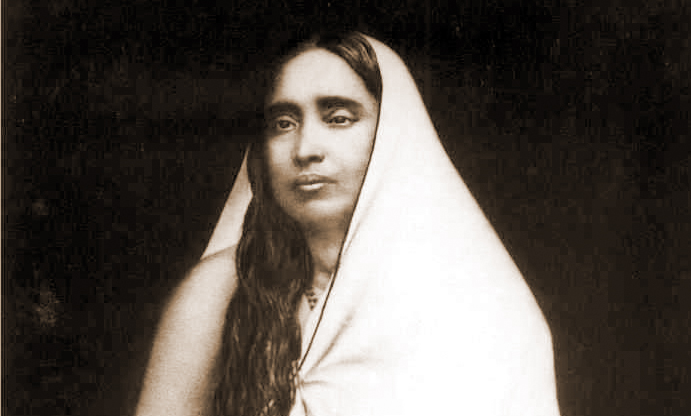 “If you want peace of mind, do not find fault with others. Rather see your own faults. Learn to make the whole world your own. No one is a stranger, my child. The whole world is your own.”
-Sarada Devi

Sri Sarada Devi (1853-1920) was Ramakrishna’s spiritual wife. She was born in a very poor but pious family in a small village not far from Kolkata. According to the Indian custom of the time, they were married when she was still very young. Hence she grew up with her family in her ancestral home in the province.

When Sarada Devi finally joined her husband in Kolkata at age 17, in a way she became Ramakrishna’s first disciple. He immediately started training her in spiritual and practical matters.

Their relationship was unique and profound, and their marriage was never consummated, being nothing but a divine union. Ramakrishna regarded Sarada Devi as the embodiment of the Divine Mother of the universe. In spite of her very hard life, Holy Mother, as she later became known, was a living example of strength, courage, wisdom, renunciation and above all universal motherhood.

After Ramakrishna’s passing away, she became his successor and a spiritual teacher in her own right, giving spiritual guidance to thousands of people. Indeed, Holy Mother had many more disciples than had Ramakrishna.

Sarada Devi taught by example and not by preaching. She looked like an ordinary woman, and yet she manifested intensely her divinity in everything she did, no matter how mundane or insignificant.

-Adapted with permission from the Ramakrishna Vedanta Society of the Philippines