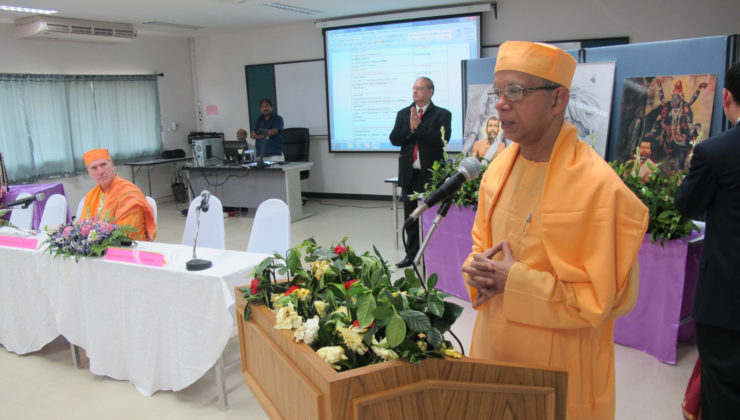 We draw our inspiration from the Vedanta philosophy as interpreted by Sri Ramakrishna, Sri Sarada Devi, Swami Vivekananda, and their associates and successors. Although we are not officially affiliated with the Ramakrishna Math and Mission, we recognize their authority, look to them for leadership and guidance, and rely on them for advice, encouragement, and moral support.

Our mission is to work toward the twin goals defined in the Ramakrishna Mission motto: Atmano mokshartham, jagad hitaya cha (“For one’s own salvation and the welfare of the world”). In pursuit of the first goal, we practice devotional activities to enrich our individual spiritual growth. In pursuit of the second, we help spread the message articulated by Sri Ramakrishna and the spiritual community he founded.

We conduct periodic satsangs—religious gatherings featuring the singing of hymns and devotional songs, chanting of mantras, readings from The Gospel of Sri Ramakrishna, and occasional talks. At various times we have been honored by visits from swamis of the Ramakrishna Order, too.

We also hold events such as the 150th birth anniversary celebration of Swami Vivekananda that our association held in 2013.

The Ramakrishna Vedanta Association of Thailand was founded in February, 2004 by Revered Swami Damodaranandaji Maharaj, a senior monk of the Ramakrishna Order. It is registered with the Royal Thai government, with spiritual oversight by Swami Samachittananda Maharaj.