Who is Swami Vivekananda? 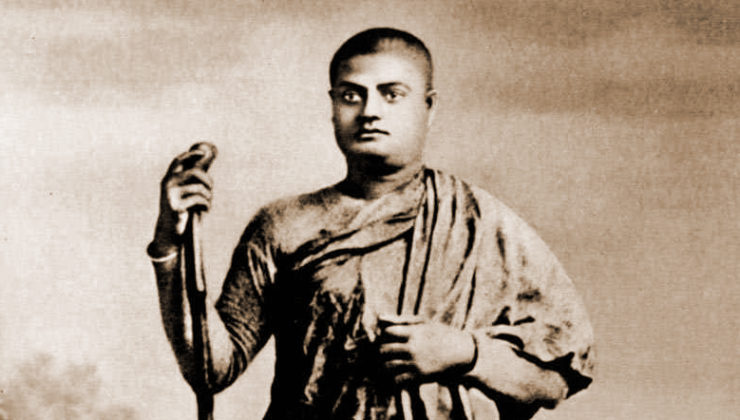 “I shall go to the mosque of the Mohammedan; I shall enter the Christian church and kneel before the crucifix; I shall enter the Buddhist temple, where I shall take refuge in Buddha and his Law. I shall go into the forest and sit down in meditation with the Hindu, who is trying to see the Light which enters the heart of everyone. Not only shall I do all these, but I shall keep my heart open to all that may come in the future.”
–Swami Vivekananda

Swami Vivekananda (1863-1902) was born Narendranath (Narendra) Datta in Kolkata. Since he started college, he showed great energy, leadership, extreme intelligence and, above all, spiritual inclination. He also was a fine singer and could play several instruments.

When he first met Sri Ramakrishna in 1881, Narendra was intrigued and puzzled by his personality. On the one hand, young Narendra, brilliant and fiercely independent, dismissed a good portion of his Hindu heritage as largely superstition. On the other hand, he was attracted by the deep and radiant holiness of Sri Ramakrishna. With his frequent ecstasies, his innocent directness of a child, his intense joy in God, Sri Ramakrishna made an indelible impression on Narendra. In him Narendra found a man who dared to say that he saw God, that religion was a reality to be felt and experienced in an infinitely more intense way than the world and, furthermore, that he could show God to Narendra.

After continuing to visit Sri Ramakrishna regularly for some years, Narendra gradually found himself the leader of his master’s disciples, most of them about his own age, whom the master was training for monastic life. After the passing away of Sri Ramakrishna, at first a small monastery in Kolkata was established, where his disciples could congregate together, after which they started to travel as wandering monks all over India.

In 1893 Narendra, who by then had assumed his monastic name of Swami Vivekananda, traveled to Chicago to attend the World Parliament of Religions. It was probably the first time in the world’s history that a venue had been organized for the representatives of all major religions to gather in one place with freedom to express their beliefs. His speech, full of warmth of heart and highlighting universalism, started with “Sisters and Brothers of America,” became the centerpiece of the event, and ended in a standing ovation.

After this event, Swami Vivekananda spent nearly two years lecturing throughout the United States where he met some of the most prominent personalities of the time and made a deep impact on them. His message to the West and to the East was to trade their best values.

Upon returning to India he established the Ramakrishna Order, with the motto, “For one’s own spiritual realization and for the good of the world,” an integration of educational, philanthropic and religious activities. Based in Kolkata, the Order now has roughly 155 centers in India and worldwide, devoted to contemplative life and social service.

By the time Swami Vivekananda passed away, he left behind a monastic organization rich in spirituality, as well as a large literature of writings and recorded words. There is not a single great man of modern India, including Mahatma Gandhi, who has not been influenced and inspired by Swami Vivekananda.